viewing mobile site
Welcome to Enchanting Emilia Clarke, a fansite decided to the actress most known as Daenerys Targaryen from Game of Thrones since 2011. She has also stared in Terminator Genisys, Me Before You, Voice From the Stone, Solo: A Star Wars Story, and Last Christmas. Emilia's become one of Hollywood's A-listers as well as representing Dolce & Gabbana's The One perfume. That's not to mention being beloved by fans and celebrities internationally for her funny, quirky, humble, and genuine personality. She's truly Enchanting.
Game of Thrones Video

by AliKat
No comments
Game of Thrones Recaps & Reviews 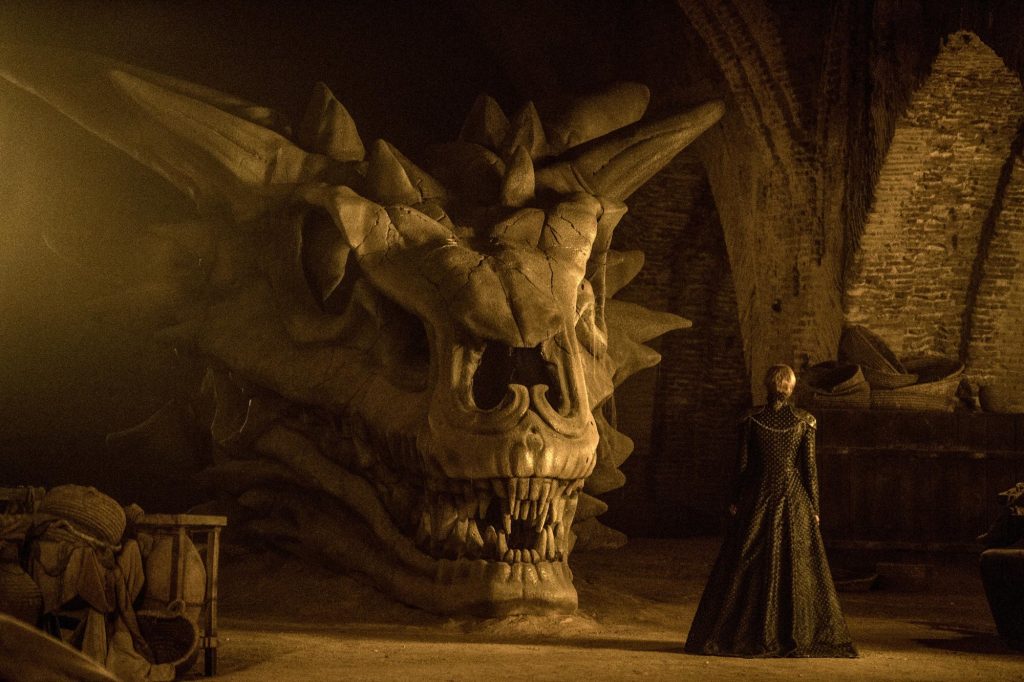 EW – Game of Thrones delivered on its promised faster pace of season 7 with an episode so crammed with major events, reunions, a riveting battle, deaths, and twists that it almost played like a season finale — yet this is only episode 2! After last week’s foreboding and stately premiere, “Stormborn” floored the narrative pedal, with nearly every scene delivering some kind of major consequence for our characters, setting the stage for a cross-section of battles and major power-player meet-ups. We start with:

Dragonstone: It was, quite literally, a dark and stormy night. Daenerys unexpectedly grills Varys about his loyalty because, let’s face it, on paper, his resume admittedly doesn’t sound very reassuring. That he’s a far bigger fan of King Robert than he was of her father doesn’t help either. “Incompetence should not be rewarded with blind loyalty,” shoots back Varys, in what sounds like a rare bit of modern political commentary from GoT. “You wish to know where my true loyalties lie?” he continues. “The people.” Tough to argue with that, and Dany doesn’t — though also threatens to burn him alive if he ever betrays her.

Hey, speaking of burning people alive, here’s Melisandre! She was last seen banished by Jon Snow and told to head south for killing Shireen. She went south all right, straight back to her former home that she used to share with Stannis Baratheon. I wonder if she still has some clothes there she wants to pick up.

The Red Woman is brought before Dany. She fills her in on the prophecy of Azor Ahai — a messianic figure in her Lord of Light religion; lived thousands of years ago, forged a flaming sword which he used to defeat evil; he’s prophesied to be reborn as the Prince That Was Promised, etc. etc.

Melisandre explains she thought Stannis was The One. Then she thought it might be Jon Snow. Now she’s not ruling out Dany either. For being some powerful Lord of Light sorcerer, Melisandre’s less confident in her Azor Ahai theory than most Game of Thrones fan blogs. Not to mention, Stannis would be so pissed if he died because of a grammar mistake.

END_OF_DOCUMENT_TOKEN_TO_BE_REPLACED

by AliKat
No comments
Game of Thrones Production Stills Screencaps

by AliKat
No comments
Game of Thrones Recaps & Reviews

‘Leave one wolf alive, and the sheep are never safe’

EW – The long wait is over. Game of Thrones returned Sunday night with a terrific season 7 opener that featured nearly every major character and set the stage for a brutal clash of queens and an epic end game in Westeros. There were maps, mass murder, surprise meetings, an unexpected callback, sibling tension, an improved Euron, and even more maps! We start with—

The Twins: Wait, when is this scene taking place? Is this a flashback to the Red Wedding? Is Walder Frey still alive somehow? As Frey gives his speech honoring the death of Robb Stark, it rather quickly becomes apparent something is amiss. At the Thrones premiere screening in Los Angeles last week, viewers were tittering almost immediately during this “cold open” (placed before the GoT credits quite deliberately to make viewers think it might be a flashback). How long were you fooled? Not very, I suspect. You’re all seasoned GoT pros at this point, right? “Leave one wolf alive and the sheep are never safe,” says “Walder” as his confused men barf blood. All it takes is serving one terrible feast, and your Yelp reviews never recover.

Arya triumphantly whips off her mask, like a psychotic Ethan Hunt, her seemingly impossible mission of killing all the Freys complete. We cheer, and lucky for Arya there wasn’t one soldier in the room who was like, “You know, I’m just going to pretend to drink this wine, I’m trying to cut back on drinking, been working on bettering myself.”

Thrones smash-cuts to the credits. There’s nothing like kicking off a new season with hundreds of people being killed by a teen girl who is, of course, our hero. If that isn’t GoT for you, not sure what is. Arya has leveled up her murderousness once again and we cheer. Yet also wonder: We learned from reading Harry Potter that murder tears the soul apart. Is this murder making Arya into somebody we might not love as much? Actress Maisie Williams wonders about this in our interview this week. It’s been on her mind the past few years — will Arya ever do something to really turn fans against her? Not today, at least.

This question is very subtly raised again in Arya’s other scene when she’s on the road and stumbles onto Ed Sheeran as a singing Lannister soldier (fun fact: This ballad was sung by a drunk Tyrion in the books). This is one of my favorite scenes in the episode despite Sheeran, who felt out of place. Musician cameos in previous seasons (like Sigur Rós and Will Champion) disappeared into the fabric of the show; you would never know they were significant unless you were super familiar with their faces, and even then you might not notice. Sheeran’s appearance is the closest the GoT has felt to having a contemporary Special Guest Star Cameo moment. Fans on Twitter were itching for Arya to kill him.

Still, Sheeran’s impact was brief. We’re quickly pulled back into this moment of Lannister soldiers behaving precisely how we do not expect — they’re sympathetic and friendly and relatable and bummed about their lack of r-mail access to keep in touch with their loved ones. I suspect the writers want us to feel for these soldiers who will presumably face Dany’s army at some point. For a moment, we even start to worry, not for Arya, but for them — what’s she going to do? Will she kill them like the Freys? Again, it raises the question of how far Arya will go.